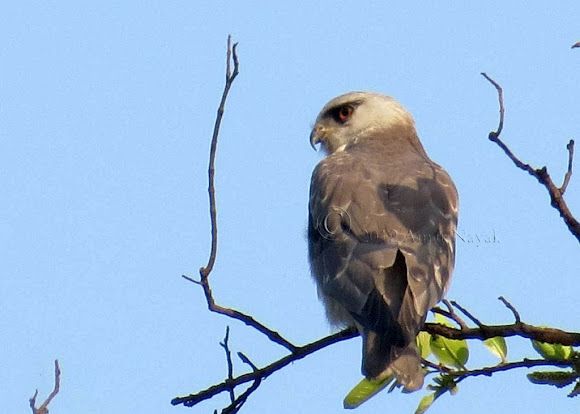 The Black-winged Kite (Elanus caeruleus) is a small diurnal bird of prey in the family Accipitridae best known for its habit of hovering over open grasslands. Bengali name of this bird is KAPASI. This long-winged raptor is predominantly grey or white with black shoulder patches, wing tips and eye stripe. The long falcon-like wings extend beyond the tail when the bird is perched. In flight, the short and square tail is visible and it is not forked as in the typical kites of the genus Milvus. When perched, often on roadside wires, it often adjusts its wings and jerks its tail up and down as if to balance itself. The Black-winged Kite breeds at different times of the year across its range. Although nesting has been noted throughout the year in India, they appear not to breed in April and May. Courtship is noisy and involves chases and once the pair is formed they copulate frequently. The nest is a loose platform of twigs in which 3 or 4 eggs are laid. The female spends more effort in the construction of the nest than the male. The eggs are pale creamy with spots of deep red. Both parents incubate but when the chicks hatch, the male spends more time on foraging for food. Females initially feed the young, sometimes hunting close to the nest but will also receive food from the male. After fledging the young birds continue to be dependent for food on the male parent for about 80 days, initially transferring food at perch and later in the air