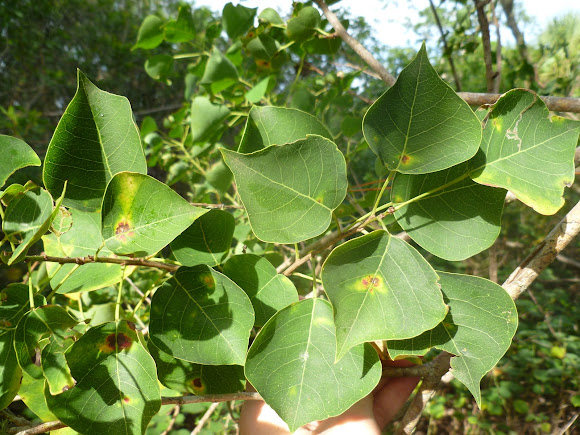 Chinese tallow is a fast growing tree with attractive fall colors that is native to eastern Asia. The leaves are arranged alternately on branches. It's distinctive leaf has a broadly ovate shape with an acuminate tip and smooth margins. The flower is borne in spikes about 8 inches long and attracts bees and other insects. The fruit is a three-lobbed pod that contains three seeds covered in a white waxy coating. It has a strong deep tap root that allows it to withstand periods of draught.

Chinese tallow can grow in areas with either fresh or salt water. It can be found along roadsides and disturbed areas, streams and coastal areas. It regrows from cut stumps or roots.

Chinese tallow was brought to the United States in the 1700's as an ornamental tree The seeds are used in making soap and candles. It is also useful in the production of biodiesel because it is the third most productive vegetable oil producing crop in the world. It has become naturalized in many areas of the United States and displaces many native plants through its vigorous growth and spread. Chinese tallow is listed as an invasive species in Florida and it is also on the Florida Noxious Weed List. The leaves and fruit are toxic to cattle and cause nausea and vomiting in humans. Florida landowners are encouraged to remove the tree and its seedlings from their property.