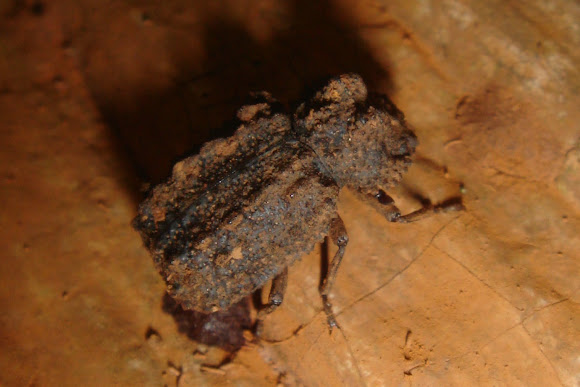 Adults are sexually dimorphic with respect to the presence of horns. Males use their two sets of horns, clypeal and thoracic, to compete for mates. Unlike many species of scarab beetles that exhibit male dimorphism for horns with major and minor morphs,[2][3][4] male B. cornutus possess a continuous range of horn and body sizes[5][6]. Bolitotherus cornutus perform reproductive behaviors on the surface of polypore shelf fungus growing on dead wood[5]. Mating pairs engage in a courtship ritual in which the male grips the female's elytra, with his thorax over the end of her abdomen. Courtship often lasts several hours, and is a necessary precursor to copulation. During a copulation attempt, the male reverses position on top of the female so that both individuals point the same direction and their abdomens are aligned. If the courtship is successful, the female opens her anal sternite and copulation takes place. Following copulation, the male remains on top, facing the same direction as the female, and mate-guards her. The male remains in this position for several hours, preventing other males from courting the female.

it was on a mushroom, but if it was on a tree i would have never of seen it!

That is awe some i didn't know there was a beetle mission! I always check to see if there are new missions but i always see the same ones! Thanks!

Awesome spot Tracy!
You could also add this to the Beetles mission http://www.projectnoah.org/missions/1150...