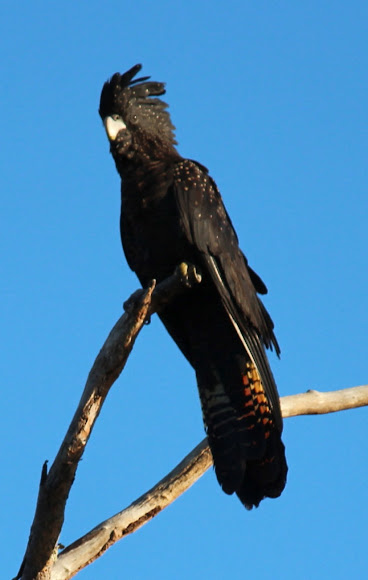 The species is usually found in eucalyptus woodlands, or along water courses. In the more northerly parts of the country, these cockatoos are commonly seen in large flocks. They are seed eaters and cavity nesters, and as such depend on trees with fairly large diameters, generally Eucalyptus. Populations in southeastern Australia are threatened by reduction in forest cover and other habitat alterations. Of the black cockatoos, the red-tailed is the most adaptable to aviculture,[2] although black cockatoos are much rarer and much more expensive outside Australia. - Wikipedia There were 6 in this flock, spotted in bushland near my home. I heard their 'creeee creeee' call before I actually saw them.

Each photo, is a masterpiece, of beauty and color....you are an artist, with a camera....

Thank you very much venusflytrap2000. They are a spectacular sight in the sky.

@Leanne this is an absolutely gorgeous bird and a wonderful spotting! great job and thanks for sharing!

I heard some yellow-tailed black cockatoos out the back of our place last week. I actually managed to get really close to one, about 5 metres away, but it was so well hidden in foliage that I couldn't get a shot. I hope they come back!

Thank you all for the lovely comments! I@Lori, it must be something to do with Aussie wildlife, I watched an emu try to pick my Dads wallet from his pocket when I was a little girl :)

WOW! Congratulations on this wonderful series and great clear photos! And the research information is excellent!

I saw some youngsters once, at a bird sanctuary. They had even more red speckling than the adults (and they tried to steal my glasses).

Thanks Argybee :) Yes, I heard them before I saw them.