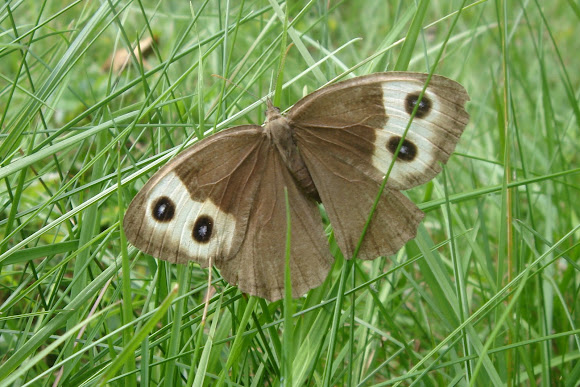 Identification: Geographically variable. Wings are brown. Upperside of forewing has 2 large yellow-ringed eyespots. Lowerside of hindwing has a variable number of small eyespots. Southern and coastal butterflies are larger and have a yellow or yellow-orange patch on the outer part of the forewing. Inland butterflies are smaller and have the yellow forewing patch reduced or absent. Wing Span: 1 3/4 - 3 inches (4.5 - 7.6 cm). Life History: Males patrol for females with a dipping flight through the vegetation. In late summer, females lay eggs singly on host plant leaves. Caterpillars hatch but do not feed, instead hibernating until spring. Flight: One brood from late May-October. Females emerge later than males. Caterpillar Hosts: Purpletop (Tridens flavus) and other grasses. Adult Food: Rotting fruit, flower nectar. Habitat: Large, sunny, grassy areas including prairies, open meadows, bogs, and old fields. Range: Southern Canada and the continental United States except for most of the Southwest and Texas, southern peninsular Florida, and northern Maine. Conservation: Isolated populations in Great Basin wetlands may be of concern. NCGR: G5 - Demonstrably secure globally, though it may be quite rare in parts of its range, especially at the periphery.

Thank you J I totally knew that too, i fee like such an idiot lol :)

Hello, could you remove this butterfly from the mission "Moths of the World?" A good way to tell a moth from a butterfly is by the antennae, which are like rounded clubs on the ends for butterflies, and thin or often feathery antennae for moths. Of course, there are occasional exceptions.