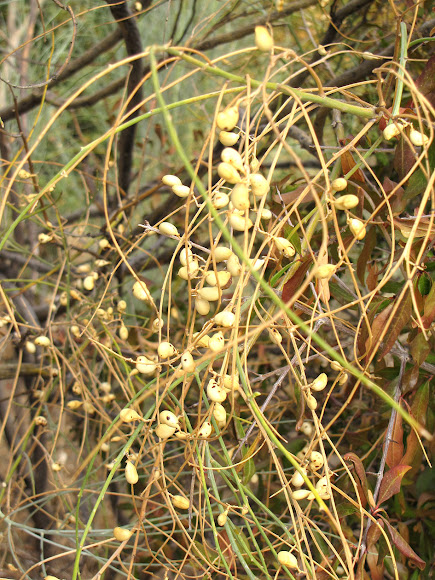 Bridal veil (white weeping) broom (Retama monosperma) is a large shrub, ten feet tall or more, and when full grown may be twenty feet across. Plants are gray-green, almost entirely leafless, with slender branches drooping in weeping willow fashion. Young plants are usually wispy, with a single stem and strong taproot. Young plants are most visible in late summer and early fall when annual grasses are brown. Flowers are small, white, and pea-like, appearing in short clusters from the stems. (California Invasive Plant Council

Native to Southern Spain (where I took this picture) and North Africa, but has spread around the world and is invasive in California where I live.

Bridal veil broom is native to the Mediterranean region, chiefly Spain (Iberian Peninsula) and North Africa, where it occurs on sandy soils near the coast and at border marshes. In its native habitat it is a minor component of the coastal scrub community (Valdesi et al. 1987). It was cultivated as an ornamental in England as early as 1690 and has been known to escape from cultivation there. There are a few records indicating some cultivation of this plant in California since 1916, with one record from San Diego in 1917 (McClintock, pers. comm.). A new invasive exotic in San Diego County, it was first noted six years ago on the Naval Ordnance Center near the city of Fallbrook. At that time it was growing in a few scattered patches covering less than ten acres. When eradication measures were implemented in 1996, it occupied over 2,000 acres of the Annex. It is believed that this plant escaped from a nearby nursery. Bridal veil broom spreads primarily by seed. Each plant produces hundreds, and on larger plants thousands, of seeds. It appears that ants and birds are the primary seed dispersers. At present, little is known about its physiology and reproductive mechanisms. (California Invasive Plant Council)

It's a very common Greek flora species, dear Ava T-B, I'm glad I was able to help with the correct ID!
Have a nice evening :)

Thank you so much, dearDespinaTsafetopoulou, for the ID!

Since there are so many people on PN today, I'm posting a few of my unknown spottings to see if I can get an ID. Thanks in advance!