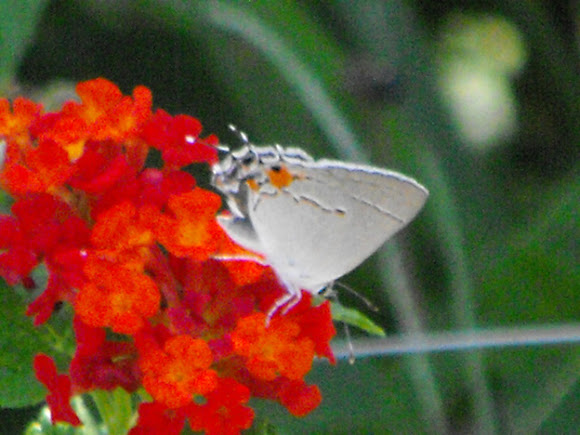 One tail on hindwing. Upperside blue-gray with large red spot near tail. Underside of spring/fall form is dark gray, summer form is paler gray. Relatively straight postmedian line is white, bordered with orange on the inside edge. Caterpillar is variably green, has long hairs on dorsum and is fairly distinctive in this family. Throughout continental United States from southern Canada south to Mexico; southward to Venezuela. Two flights from May-September in the north, three-four flights from February-November in the south.

Thank you, AndiBrowning. ") I planted a Chinquapin Oak Tree this spring and read somewhere, after the fact, that it was a host for the Grey Hairstreak. I had never heard of them till this year and so I have been looking for them. This was my first sighting ever, I think.

Nice. I saw one of these yesterday for the first time ever.