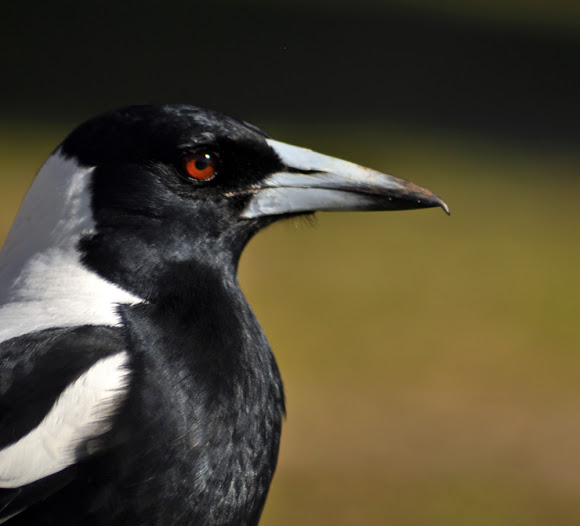 A medium-sized black and white passerine bird native to Australia and southern New Guinea. A member of the Cracticidae, it is closely related to the butcherbirds. At one stage, the Australian Magpie was considered to be three separate species, although zones of hybridisation between forms reinforced the idea of a single species with several subspecies, nine of which are now recognised. The adult Australian Magpie is a fairly robust bird ranging from 37 to 43 cm (14.5–17 in) in length, with distinctive black and white plumage, gold brown eyes and a solid wedge-shaped bluish-white and black bill. The male and female are similar in appearance, and can be distinguished by differences in back markings. With its long legs, the Australian Magpie walks rather than waddles or hops and spends much time on the ground.

G. tibicen hypoleuca is a small white-backed subspecies with a short compact bill and short wings, found on King and Flinders Islands, as well as Tasmania.

Hi Lori! Great shots of a cool bird! I have searched the local missions for any missions to do with Tasmania but found none. You should start a mission of Flora and Fauna of Tasmania!

I saw the Tasmanian magpies long before I ever saw the mainland ones. I was a bit shocked by how much bigger and more heavily billed they are than ours are. They are a typical island sub-species that has gotten smaller when cut off from the parent species.

They are just starting to move into our valley. Their singing is so delightful.

Nice shots lori. No wonder they dropped the 3 species. I find mixed markings in many parts of the country now. So smart these birds - great to watch and listen to.