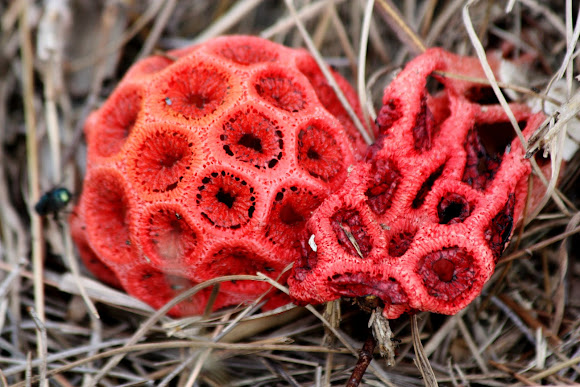 Clathrus ruber is a species of fungus in the stinkhorn family, and the type species of the genus Clathrus. It is commonly known as the latticed stinkhorn, the basket stinkhorn, or the red cage, alluding to the striking fruit bodies that are shaped somewhat like a round or oval hollow sphere with interlaced or latticed branches.

The fungus is saprobic, feeding off decaying woody plant material, and is usually found alone or in groups in leaf litter on garden soil, grassy places, or on woodchip garden mulches. Although considered primarily a European species, C. ruber has been introduced to other areas, and now has a wide distribution that includes northern Africa, Asia, Australia, and North and South America. The species was illustrated in the scientific literature during the 1500s, but was not officially described until 1729.

The fruit body initially appears like a whitish "egg" attached to the ground at the base by cords called rhizomorphs. The egg has a delicate, leathery outer membrane enclosing the compressed lattice that surrounds a layer of olive-green spore-bearing slime called the gleba, which contains high levels of calcium that help protect the developing fruit body during development. As the egg ruptures and the fruit body expands, the gleba is carried upward on the inner surfaces of the spongy lattice, and the egg membrane remains as a volva around the base of the structure. The fruit body can reach heights of up to 20 cm (7.9 in). The color of the fruit body, which can range from pink to orange to red, results primarily from the carotenoid pigments lycopene and beta-carotene. The gleba has a fetid odor, somewhat like rotting meat, which attracts flies and other insects to help disperse its spores. Although the edibility of the fungus is not known with certainty, its odor would deter most from consuming it. C. ruber was not regarded highly in tales in southern European folklore, which suggested that those who handled the mushroom risked contracting various ailments.

That's an amazing spotting -- never seen anything like it!

Thank you - to all that responded as to its name!

It looks so intresting