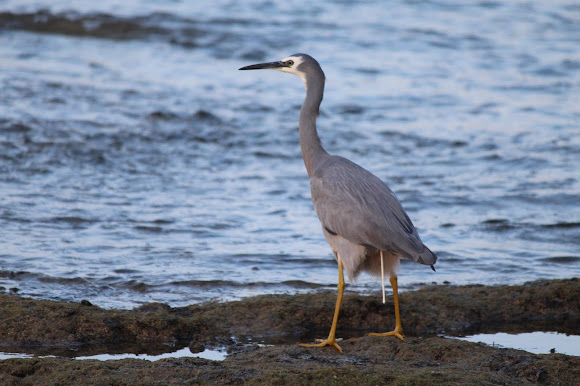 It is a medium-sized heron, pale, slightly bluish-grey, with yellow legs and white facial markings. The iris may be grey, green, dull yellow or cinnamon. The regions between the eye and bill on the side of the head (lores) are black. The beak is black and often pale grey at the base. The adult typically weighs 550 g and ranges from 60 to 70 cm in height.

Spotted at Nusa Dua, Bali during low tide, costal reef area. Is a common bird throughout most of Australasia, including New Guinea, the islands of Torres Strait, Indonesia, New Zealand, and all but the driest areas of Australia. The white-faced heron is locally nomadic and found in both fresh and salty wetlands, farm dams, pastures, grasslands, crops, shores, saltmarsh, tidal mudflats, boat-harbours, beaches, golf courses, orchards or in garden fish-ponds.