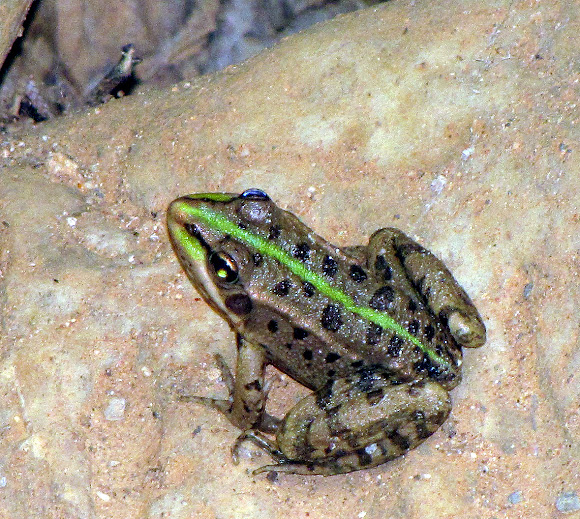 These two frogs were in part of the drainage system of the Alhambra in Granada. They are very common in Spain.

Thanks Ken for adding your wasp nest, and for your kind words.

Cool frog. I have never seen one, even in a zoo. I scanned your spottings, and you have a diverse collection. I added my Guinea Wasp to the Mission on Animal Architecture per your request.

Erik6, it sort of is; it was in the hundreds of years old drainage system of the Alhambra.

Hi Erik6, No, it's not my frog. I saw it in the wild at the Alhambra in Grandada, Spain.

Is that your frog? I had one once but it jumped out of the tank. It was an African dwarf frog. When I got it at the pet shop the owner never said it could jump.

You're welcome Erik6. Wikipedia makes looking for Latin names easy if you know the common name.

Great looking frog. Thanks for helping me with the latin name of domesticated dogs.

Thanks saralagamage. It's nice when organisms sit perfectly still and let you focus and take lots of snaps!

Thanks Emma and Antonio (and Cindy).

great first spot of an amphibian!

Thanks nexttogone; this is my first amphibian!

Awesome frogs and great pics... thanks for posting it!

It will be a pleasure!

Oh arlanda! I will take you up on that offer! it may be three years from now, but I'm sure we'll still be in contact here on PN!

Dear Ava, if some day you come to Madrid I can show you the house of Perez the mouse. It is located in Arenal Street, in the center of Madrid, in an old cakes shop, inside a cookies box. Have a look:
http://www.casamuseoratonperez.es/index....

Thanks, arlanda.
Daniele, what I love about this being Perez's Frog is that when i was little and lost a baby tooth, Perez the Mouse would come take my tooth and leave me a dime. Everyone else had that insipid tooth fairy, but I got a mouse!