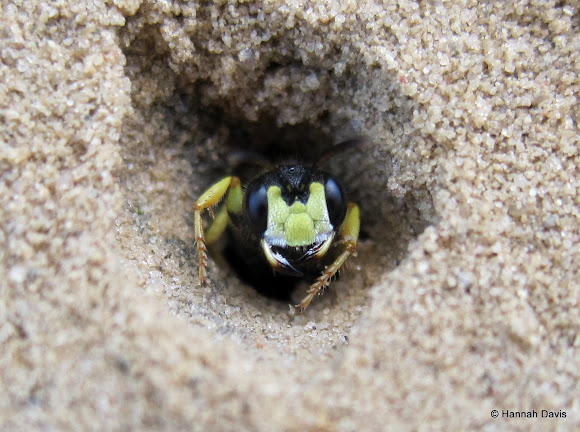 I was on my way to class when I caught a glimpse of a little face peering up from a hole in the ground. She's a wasp, possibly Cerceris rybyensis. She'll have laid an egg in there and provisioned the larder with paralysed insects for her offspring to eat. I checked on her again at the end of the day and found the hole filled in, with a wasp of the same species circling - I don't know if it was the same one as before. It landed repeatedly and dug, but apparently didn't find what it was looking for. After a while it gave up and started peeking into ant hills and other holes in the ground. I'm not sure what it was doing - it's possible that the nest was filled in by mistake (maybe someone stepped on it?) and the wasp wanted to get back in and finish it, but it's equally possible that the nest's owner closed it and the wasp I saw was hoping to burgle it. I don't know enough about this species' biology to say.

Thanks! There are so many species that nest in the ground - it's always worth taking a closer look at "ant hills" with very round bee or wasp-sized entrances.

Thank you for all the observations. I have a habit of doing the same and I learn so much every time, Thank you so much for sharing your experience with this wasp with us.