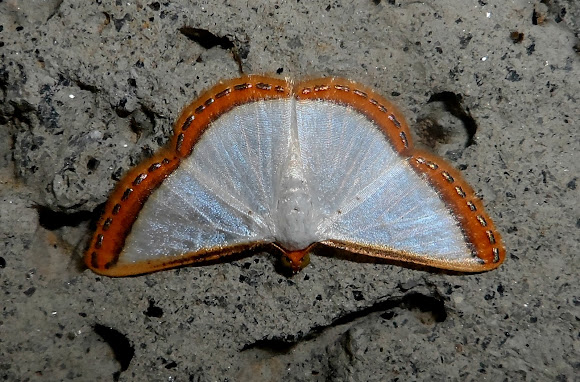 Disturbed forest habitats at altitudes of between 200-1500m. This species was deliberately introduced to the Northern Territory of Australia in 2004 as a means of controlling Mimosa, a prickly bush which originated in South America but was imported into the botanic gardens at Darwin, from where it spread across the floodplains to become a threat to native Australian plants.

Lifecycle The turquoise eggs are laid in batches on Mimosa pigra and related plants. The "looper" larvae are green, and feed diurnally. The pupae are very dark reddish black, and are formed without a cocoon amongst le

Thank you all for your kind comments.

Lovely moth. Doesn't even look real, somehow, does it? Congratulations!

Super spotting Sckel. Interesting information about the introduction to Australia. Thanks and congratulations.

Congratulations on your SOTD. A stunning little moth!

Congratulations Skel, this moth is gorgeous!

Congratulations Skel, this attractive moth with an equally beautiful name is our Spotting of the Day!

What a beautiful name for such a pretty moth.