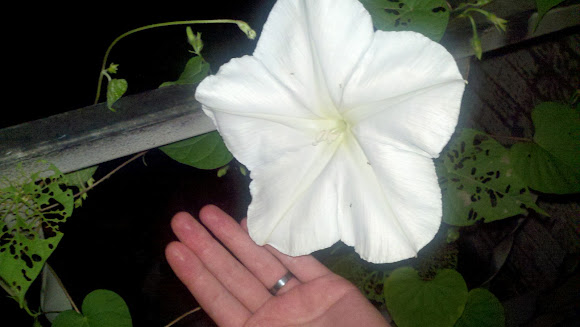 growing in a pot with morning glory flowers. on a porch in urban neighborhood.

Humans use Ipomoea for their content of medical and psychoactive compounds, mainly alkaloids. Some species are renowned for their properties in folk medicine and herbalism; for example Vera Cruz jalap (I. jalapa) and Tampico jalap (I. simulans) are used to produce jalap, a cathartic preparation accelerating the passage of stool. Kiribadu Ala (giant potato, I. mauritiana) is one of the many ingredients of chyawanprash, the ancient Ayurvedic tonic called "the elixir of life" for its wide-ranging properties. Other species were and still are used as potent entheogens. Seeds of Mexican morning glory (tlitliltzin, I. tricolor) were thus used by Aztecs and Zapotecs in shamanistic and priestly divination rituals, and at least by the former also as a poison, to give the victim a "horror trip" (see also Aztec entheogenic complex). Beach moonflower (I. violacea) was also used thus, and the cultivars called 'Heavenly Blue Morning Glory', touted today for their psychoactive properties, seem to represent an indeterminable assembly of hybrids of these two species. Ergoline derivatives (lysergamides) are probably responsible for the entheogenic activity. Ergine (LSA), isoergine, D-lysergic acid N-(α-hydroxyethyl)amide and lysergol have been isolated from I. tricolor, I. violacea and/or purple morning glory (I. purpurea); although these are often assumed to be the cause of the plants' effects, this is not supported by scientific studies, which show although they are psychoactive, they are not notably hallucinogenic.[citation needed] Alexander Shulgin in TiHKAL suggests ergonovine is responsible, instead. It has verified psychoactive properties, though as yet other undiscovered lysergamides possibly are present in the seeds. Though most often noted as "recreational" drugs, the lysergamides are also of medical importance. Ergonovine enhances the action of oxytocin, used to still post partum bleeding. Ergine induces drowsiness and a relaxed state and might be useful in treating anxiety disorder. Whether Ipomoea species are a useful source of these compounds remains to be determined. In any case, in some jurisdictions certain Ipomoea are regulated, e.g. by the Louisiana State Act 159 which bans cultivation of I. violacea except for ornamental purposes. http://en.wikipedia.org/wiki/Ipomoea