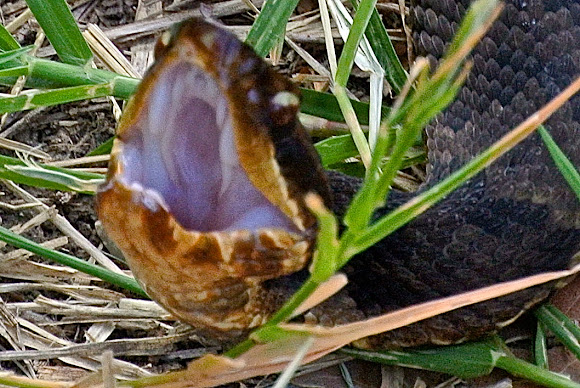 The Cottonmouth is a venomous snake, a species of pit viper, found in the southeastern USA. Adults are large and capable of delivering a painful and potentially fatal bite. When antagonized, they will stand their ground by coiling their bodies and displaying their fangs. This is the world's only semiaquatic viper, usually found in or near water, particularly in slow-moving and shallow lakes, streams, and marshes.

The Cottonmouth usually found in or near water, particularly in slow-moving and shallow lakes, streams, and marshes. It is also found in brackish water habitats and is sometimes seen swimming in saltwater. It tends to favor freshwater marshes. The snake is not limited to aquatic habitats, however, large specimens have been found more than a mile from water. In various locations, the species is well-adapted to less moist environments, such as palmetto thickets, pine-palmetto forest, pine woods in East Texas, pine flatwoods in Florida, eastern deciduous dune forest, dune and beach areas, riparian forest and prairies.