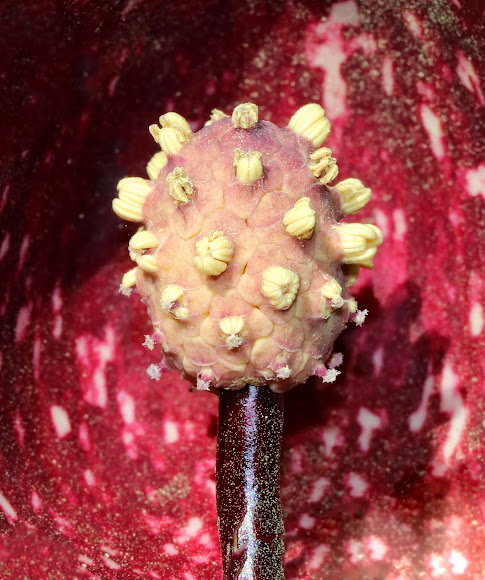 The first wildflower of the year: skunk cabbage!

The flowers emerge in early spring before the leaves. The entire plant generates heat through cyanide-free cellular respiration, which makes it one of the few plants capable of thermogenesis. The plants can produce temperatures of 15-35 degrees C! This allows them to grow through the frozen ground. The heat also helps spread the odor of their flowers to attract early spring pollinators.

The flowers consist of two parts: a spathe and a spadix. The spathe, which is mottled maroon in color, is a modified leaf that looks like a hood. The spathe surrounds a spadix, which is a cylindrical structure that contains lots of tiny flowers packed together. The spadix can be yellow, pink, or purple.

Growing along a stream that ran throughout a swampy area in a mixed forest.

Skunk cabbage is not a true cabbage plant, but is a member of a mostly tropical family of plants, Araceae. It gets its name from the pungent skunk-like odor that is released when any part of the plant is broken or damaged, and from its huge, green leaves that grow in a rosette and look somewhat like a cabbage.

Thanks Danièle! I was very excited to see them already growing :)

Spring has sprung for you Christine! Nice seasonal observation.