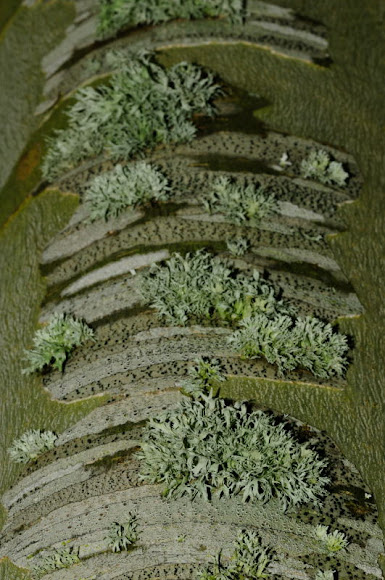 Oak moss is a species of fruticose lichen valued in perfumery for its heavy, oriental fragrance and as a fixative base. The pale greenish gray thallus of Oakmoss is short (3–8 cm in length), palmately branched, ending in pointed tips and bushy, and grow together on bark to form large clumps. The upper surface is green and warty with pale gray reproductive bodies (soredia). The undersurface is whitish with a faint netlike pattern. They are also highly branched, resembling the form of deer antlers. The colour of Oakmoss ranges from green to a greenish-white when dry, and dark olive-green to yellow-green when wet. The texture of the thalli are rough when dry and rubbery when wet.

It grows in mountainous areas throughout much of the Northern Hemisphere. Oakmoss grows primarily on the trunk and branches of oak trees, but is also commonly found on the bark of other deciduous trees and conifers such as fir and pine. Sptted on the trunk of a young chestnut

Oak moss was used in perfumery as early as the 16th century. Baskets filled with it have been found in the ancient royal tombs of Egypt, but whether it was intended for perfume or for food is not known. Oak moss contains a starchy edible substance. A mixture of acids extracted from it is used in drugs for treating external wounds and infections. Camera Model: NIKON D300. Exposure Time: 1/60 sec.; f/32; ISO Speed Rating: 200. Focal Length: 90.0 mm. Flash fired