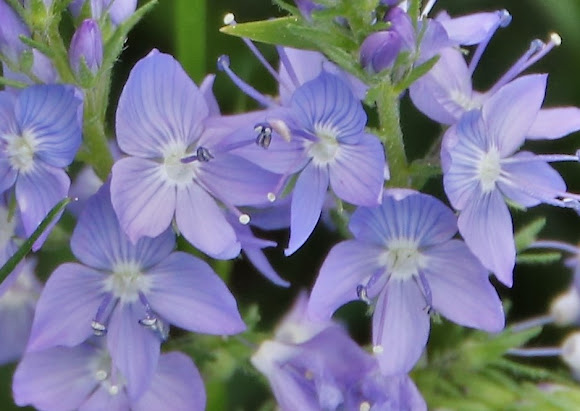 Difficult with this genus, with over 500 species having all roughly the same flower... Here, I'm a bit lost: this Veronica grows some 40 cm tall, presents opposite and elongated non-dented leaves, (somewhat like Veronica alpina) and tightly packed inflorescences (nothing like V. alpina as far as I can say...) of bright-blue flowers, patterned with darker blue lines; flowers are small, about 12 to 14 mm in diameter; with three large petals somewhat triangular in shape.

Veronicas are common wildflowers in Europe, widespread throughout the continent and found in a variety of habitats. Here, found on pasture or grassland in hills in lowlands around Geneva lake (lac Leman), just in between Jura and Alps mountains ranges.

Most species of the Veronica genus are comestible, and used as tea or salads; I'm finding that some taste like watercress; but I haven't tried myself yet. Some of Veronica species were also used as herbal tea for treating respiratory and cardiovascular problems, nervous systems disorders etc.