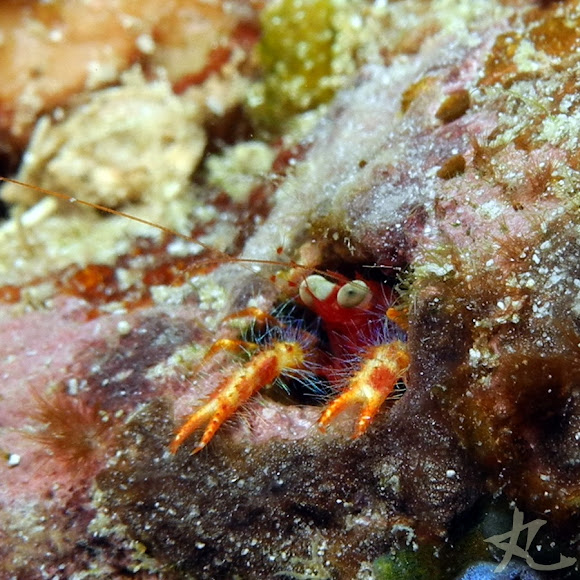 Also known as Bug-Eyed Squat Lobster and Robokon Squat Lobster. It has a red body and yellow-and-orange appendages, covered in fine hairs.

Spotted this fidgety crustacean by accident while I was taking pictures of the nudibranch, Phyllidiopsis annae (in the 2nd & 3rd photos). It was in 19m of water at the Angel's Cove dive site, Talikud Island. The nudibranch measured less than 1cm long, and the squat lobster was even tinier. This squat lobster apparently loves to hang out inside small holes in rocks or coral heads. It rarely comes out, especially when there are threatening creatures around (ie., divers), and that's why I feel very lucky to have captured it emerge from its hole to grab something from nearby. I think it was a fish -- an even tinier one! -- that it had in its claw (see last photo).

Awesome... I was wondering how you spotted this one and then I read it. ") You are lucky!

Thanks very much, Alice and Emma!