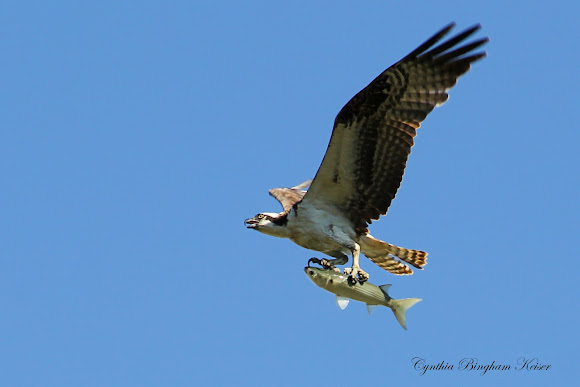 This beauty flew right in front of us while we were cleaning the trails around the lagoon. It has its prey in its talons. "The upperparts are a deep, glossy brown, while the breast is white and sometimes streaked with brown, and the underparts are pure white. The head is white with a dark mask across the eyes, reaching to the sides of the neck. The irises of the eyes are golden to brown, and the transparent nictitating membrane is pale blue. The bill is black, with a blue cere, and the feet are white with black talons. A short tail and long, narrow wings with four long, finger-like feathers, and a shorter fifth, give it a very distinctive appearance." - Wikipedia

San Elijo Lagoon. "The Osprey is the second most widely distributed raptor species, after the Peregrine Falcon. It has a worldwide distribution and is found in temperate and tropical regions of all continents except Antarctica. In North America it breeds from Alaska and Newfoundland south to the Gulf Coast and Florida, wintering further south from the southern United States through to Argentina." - Wikipedia

They work so hard for their food! Wow! What a very amazing photo!

Thank you Chief RedEarth, Scott and Mac! This was a great moment for the whole family.

Love this Cindy! I love how you can see the big talons in the first picture...they're so adapted to fish with those big hooks on their feet!! ;-)

Thank you so much Joe, Seema and Karen!

:) Thank you Ava and Satyen!

I'm glad...looking forward to your wisdom and knowledge.

Hi Ava, I was having the worst PN withdrawals :) I know I should be sleeping but I needed some nature and PN community time. Miss everyone and hope to be back on much more next month.

Hi Cindy, nice to see you here this evening.

Thank you nexttogone and Ha Truong!