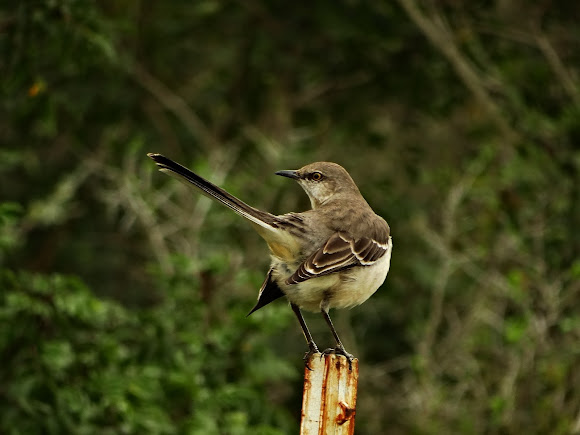 The Northern Mockingbird is a medium sized bird and is gray-brown in color with a white bar on each wing. It has a long tail and legs, and has a thin black bill that is slightly curved.

Habitat: Often seen in and around my house which is located in a suburban area. Typical habitat: parks, forest edges, open land, thickets, urban, and suburban areas. Range: Throughout North and South America. Nest: Males select several sites and begin to construct nests. The female ultimately chooses the site and completes the nest. Northern Mockingbirds have 2-3 broods yearly with a clutch size of 2-6 eggs. Diet: Their diet includes but is not limited to the following: beetles, moths, bees, lizards, berries, and fruits.

Of course living in San Antonio, Texas the Northern Mockingbird is abundant. They are quite gregarious and will often defend their young by diving down and pecking at predators. They also make loud calls when defending their young. FUN FACTS: 1. Mockingbirds were kept as cage birds in the 19th century at such an alarming rate that they nearly vanished in areas of the east coast. 2. Male mockingbirds can learn approximately 200 songs in their lifetime. 3. The oldest Northern Mockingbird on record was just shy of 15 years and was found in Texas. Ref: https://www.allaboutbirds.org/guide/Nort...

I thought so too Ava!