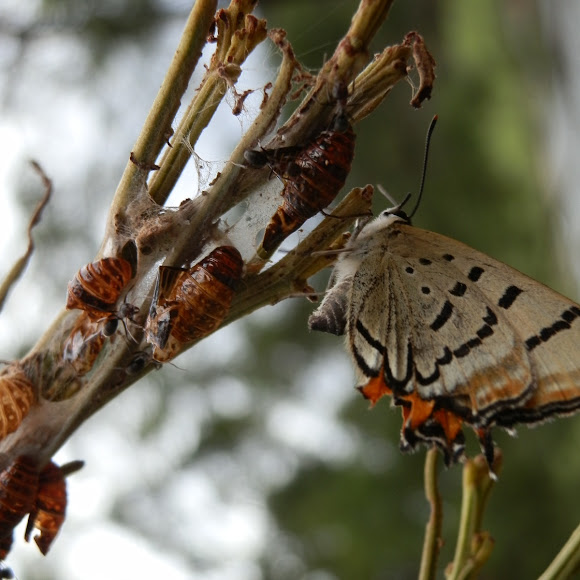 This spotting is of just one tree which accommodated every stage of the life-cycle of the imperial blue or imperial hairstreak butterfly. Pic 1 shows a male butterfly resting beside a pupa. Pic 2 shows a cluster of pale blue-grey eggs with fascinating spikey outer coverings (see reference link in notes). The caterpillar in pic 3 had small horn-like tubercles along the dorsal aspect of the body. Pic 4 shows a cluster of glossy dark pupae and pic 5 shows the exuviae.
Pic 6 is that of an adult.
Every stage of this butterfly was attended by hoards of ants (Iridomyrmex ). They were running around all over the tree , clustering in large numbers around the pupae. There were ants around the eggs and caterpillar.
Another interesting feature was the fine webbing around the eggs and the pupae.

Spotted on a black wattle tree (Acacia mearnsii) near wetlands at a retarding basin.

The relationship between the ant and this family of hair-streaks is interesting.
Adrian Hoskins (ref link) writes "The pupae are black with orange bands between the segments, and are formed in clusters attached to twigs. The pupae are also attended by Iridomyrmex ants. Experiments have shown that in cases where ants have been denied access to the pupae the latter have suffered up to 95% parasitism by the Chalcid wasp Brachymeria reginia. Conversely, pupae attended by the ants experienced zero parasitism. Larvae and pupae have been shown able to communicate with ants using visual, audio and chemical signals which are used to appease the ants, which would otherwise attack and kill them."
The male butterflies eclode first and eagerly wait by pupae for females to emerge. They have been observed to "flock" mostly to pupae that are attended by most number of ants.
Here is a close-up of the eggs :
http://commons.wikimedia.org/wiki/File:J...
More interesting reading about interaction with ants
http://bioold.science.ku.dk/drnash/pages...