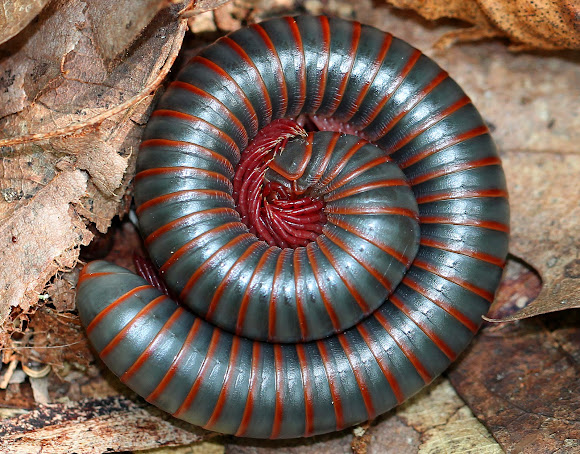 Large, cylindrical millipede that was 8 cm long! This species can grow to be about twice as large (10cm) as any other millipede that lives in North America. They curl up into a spiral when threatened. They have two pairs of legs on most body segments, and are gray/black with red lines on the edge of each segment.

Spotted in a deciduous forest.

Millipedes have spiracles on their body segments, which are connected both to their respiratory systems and to pairs of ozadenes (stink glands). These ozadenes can release noxious substances, which may cause serious chemical burns. However. unlike many other millipedes, the North American Millipede doesn't release hydrogen cyanide. They do however, excrete a substance that causes a temporary discoloration of the skin. They do not bite, and their only defense is their secretions.

Thank you very much for SOTD for this physically and mathematically beautiful millipede! Thanks also to everyone for the nice comments :)

Congratulations Christine, on your SOTD....

Congratulations Christine, this beautiful and informative spotting has earned you a Spotting of the Day:

Great series Christine congrats and thanks for sharing

Lol, thanks Lisa...You are so sweet...but, I don't think this millipede would be a sweet treat that I would want to lick, haha. Happy Holidays, here is your noxious millipede candycane treat ;P

*coughs* This should AT LEAST get a spotting of the day! Looks so much like a candycane! <3 It is just wonderful!

Do you know about this mission Christine?
http://www.projectnoah.org/missions/9071...