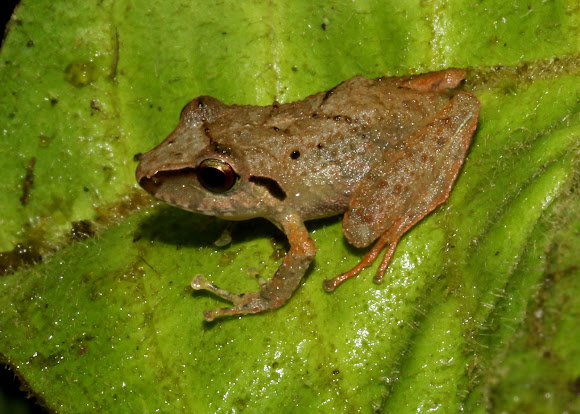 Also known as the Peruvian Rain Frog. Medium sized Robber Frog species with a SV length of about 45mm (a bit under 2"). Pale beige/brown dorsal surface with characteristic black line running form snout tip through eye down over the shoulder and has a fine pale line running directly above it.. Skin is slightly granular with various black dots and fine lines on the back. The rear legs are faintly barred. Although markings varied slightly between individuals they all appeared to have a small black dot above the shoulder.

Found in high cloud forest beside a small stream in thick foliage at night. This was in East Peru, on the Manu Road. This is a widespread species and is found from here right down to oxbow lake country in the Amazon Basin.

There appear to be several similar species and the high probability of sub species occurring in this greater area. There is a lot of research work being done at present in this habitat on Cloud Forest amphibians.