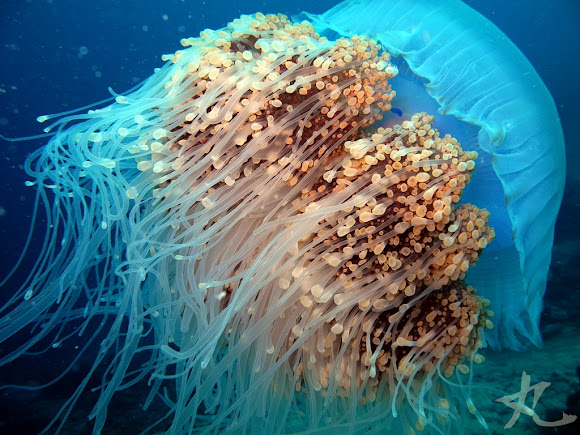 This species of jellyfish is distinctive for the "crown" that it has above its bell. (To me it looked like a brain.) It's also known as Cauliflower Jellyfish because its eight curly-looking oral arms resemble cauliflower heads.

Most of the time, this species is oceanic, but has been known to drift inshore (as in the case of this spotting). According to EOL, it is "broadly distributed in waters from the mid-Pacific through the Indo-Pacific to the Red Sea, and in the Atlantic off West Africa."

Spotted this graceful jellyfish in about 15m of water at the Angel's Cove dive site, Talikud Island, Philippines. It was slowly swimming towards the surface. It measured about half a meter in diameter and about a meter or so in length.

Congrats Blogie! This stunning series has been chosen as a runner up in the Best of 2012, Other category.

Hi maggie3 - jellyfish don't have brains. It must be something else.

I was really lucky to have seen it, Gerardo. It was at the very beginning of my dive, just under the boat. :)

Thanks for your compliments, guys!

Wow Wow Wow this are the best photos from a Nomura´s i have ever seen! Extraordinary Congratulations my friend well deserve :):)

So beautiful I cried for a second!!!!

Wow, Blogie, this is awesome!! Jellyfish are so diverse, this one is a beauty! The video is so cool, it's surprising how strongly it can swim against the current. What an awesome spotting!

@Marta - Oh you will love the dive sites in the Visayas! I hope you take lots of underwater photos for Project Noah! :)

Amazing! I am just today heading to Visayas. I hope to see as many nice things as you are showing to us :-)

Again, thank you! You all inspire me to photograph more underwater critters for the sake of knowledge. :)

Efforts are honored... Congrats Bloggie for taking efforts on spotting and presenting such amazing underwater Organisms.