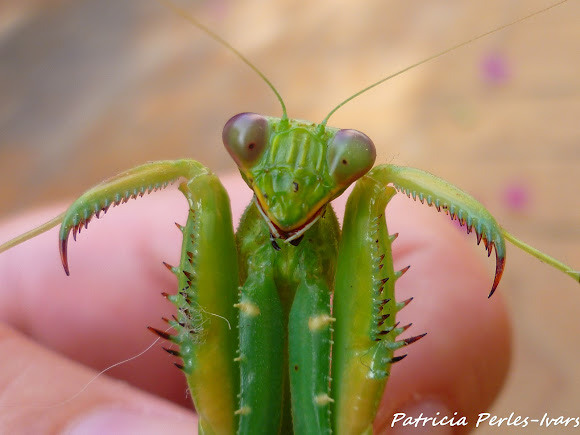 Despite its scientific name (viridis is Latin for green) this insect ranges in color from bright green to dull brown.Females can reach 10 centimetres (3.9 in) in length. Due to the sexual dimorphism typical of mantises, the male is much smaller. Females may also be distinguished from males as they have six segmented abdomens compared to an eight segmented abdomens of the males. As adults, both sexes have a distinctive white spot on their wings. They have a yellowish color on their inner foreleg distinguishable from the black eyespot and white dots of the European mantis Mantis religiosa with whom it shares some range.

I think it may be a male. It has a large wound behind the head, which may have caused the female

thank you so much @manolovbg and @AustinJacobs!!
I do the best I can! :)

I love the picture.

It looks like it's making a silly face for the camera. Amazing pictures!