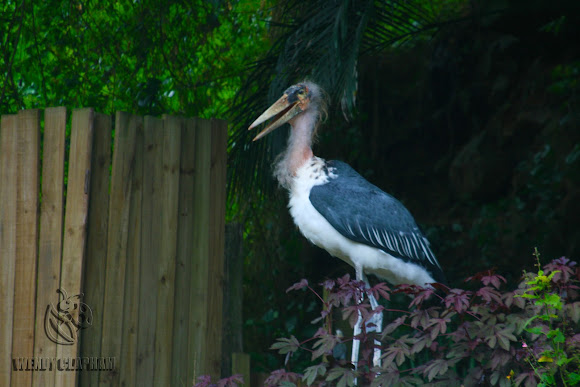 The Marabou Stork (Leptoptilos crumeniferus) is a large wading bird in the stork family Ciconiidae. It breeds in Africa south of the Sahara, in both wet and arid habitats, often near human habitation, especially waste tips. It is sometimes called the "Undertaker Bird" due to its shape from behind: cloak-like wings and back, skinny white legs, and sometimes a large white mass of "hair".

The Marabou Stork is a frequent scavenger, and the naked head and neck are adaptations to this livelihood, as it is with the vultures with which the stork often feeds. In both cases, a feathered head would become rapidly clotted with blood and other substances when the bird's head was inside a large corpse, and the bare head is easier to keep clean. This large and powerful bird eats mainly carrion, scraps and faeces but will opportunistically eat almost any animal matter it can swallow. It occasionally eats other birds including quelea nestlings, pigeons, doves, pelican and cormorant chicks, and even flamingos. During the breeding season, adults scale back on carrion and take mostly small, live prey since nestlings need this kind of food to survive. Common prey at this time may consist of fish, frogs, insects, eggs, small mammals and reptiles such as crocodile hatchlings and eggs.Though known to eat putrid and seemingly inedible foods, these storks may sometimes wash food in water to remove soil.When feeding on carrion, marabou frequently follow vultures, which are better equipped with hooked bills for tearing through carrion meat and may wait for the vultures to cast aside a piece, steal a piece of meat directly from the vulture or wait until the vultures are done. As with vultures, Marabou Storks perform an important natural function by cleaning areas via their ingestion of carrion and waste. Increasingly, marabous have become dependent on human garbage and hundreds of the huge birds can be found around African dumps or waiting for a hand out in urban areas. Marabous eating human garbage have been seen to devour virtually anything that they can swallow, including shoes and pieces of metal. Marabous conditioned to eating from human sources have been known to lash out when refused food