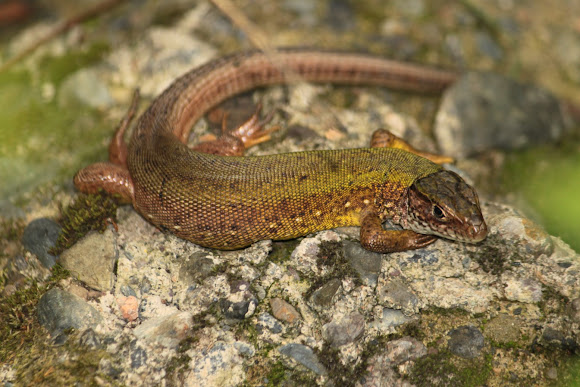 The European green lizard (Lacerta viridis) is a large lizard distributed across European mid-latitudes from Slovenia and eastern Austria to as far east as the Black Sea coasts of Ukraine and Turkey. The lizard reaches up to 15 cm (5.9 in) from the tip of the muzzle to the cloaca. The tail can be up to twice the length of the body, total length is up to 40 cm (16 in). This lizard sometimes sheds its tail to evade the grasp of a predator, regrowing it later.

It is known from elevations up to 2,200 m (7,218 ft) above sea level and its typical habitat is dense bushy vegetation in open woodland, hedgerows, field margins, embankments and bramble thickets. In the northern part of its range it may be found on bushy heath-land and in the southern part it prefers damp locations.