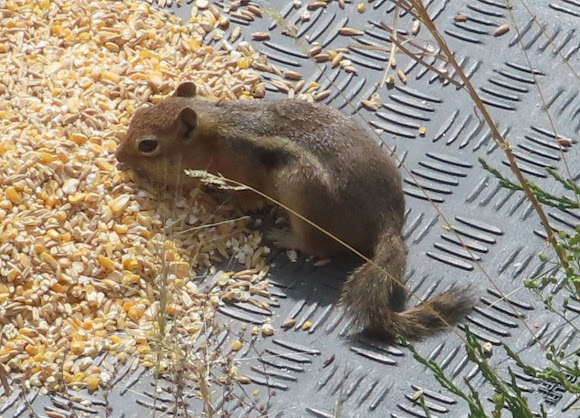 Often mistaken for a chipmunk, C. lateralis is larger than a chipmunk and also doesn't have stripes on the face, as chipmunks do. It is light brown above and tan underneath. There is a beige lateral stripe on each side of the body. On this individual it is not white as most pictures show. The mantle from which it gets its name is barely visible also, but it is undoubtedly a Golden-mantled Ground Squirrel. I suspect this one was a young one as it was only 6-7 inches long as opposed to the 9-11 inches of an adult.

This ground squirrel is found from southeastern British Columbia and Alberta, Canada along the Rocky Mountains into Arizona and New Mexico. in Canada south to New Mexico and Southern California. These were found in a Ponderosa pine forest in the Colorado Rocky Mountains at an elevation of 2,800 masl.

A friend in the Rockies normally puts out a small amount of grain for the small deer herd that is nearby, allowing him to see them almost daily. While visiting this year the deer didn't come by. We discovered 3 neighbors had large dogs which ran free and, no doubt, kept the deer away. However. Some chipmunks and ground squirrels entertained us in their place.

Thanks Dawn. They were entertaining :-)

Thanks Mauna. They were fun to watch.