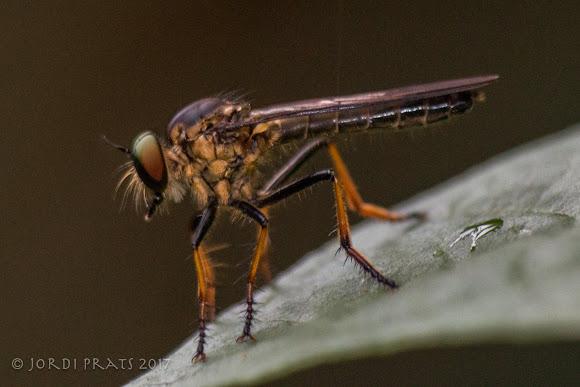 About 15mm large, elongated body brown & black colour, spiny legs and three simple eyes in a characteristic depression on the top of their head between their two large compound eyes, dense moustache of stiff bristles on the face, the antennae are short with three segments.

Spotted during a day walk at Gunung Gede National Park, Java / Indonesia. Asilidae occur in all zoogeographical regions except Antarctica. However, the highest levels of biodiversity are in warm climates; tropical or subtropical and arid or semi-arid regions tend to have the greatest variety of species, followed by areas where rainfall is highly seasonal.

The Asilidae are the robber fly family, also called assassin flies. The name "robber flies" reflects their notoriously aggressive predatory habits; they feed mainly or exclusively on other insects and as a rule they wait in ambush and catch their prey in flight. Kingdom: Animalia Phylum: Arthropoda Class: Insecta Order: Diptera Family: Asilidae Subfamily: Asilinae or Ommatiinae Genus: Ommatius