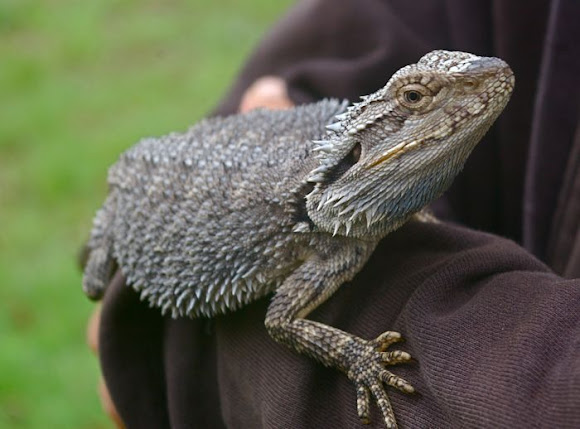 The eastern bearded dragon resembles its close relative, the smaller central bearded dragon. It is usually grey-black in skin colour and is sometimes reddish-brown, yellowish-brown, or dark brown. Juveniles are paler in colour than the adults and have patterns that fade as they mature. As it matures, it develops a subtle pale yellow, blue, or green tinge on the forepart of its head. The adult males can grow up to about 24 inches (60 cm), and females up to 20 inches (50 cm). The adult males have a dark grey to black "beard".

It is most common in eastern Australia south of Cape York Peninsula, but specimens have been collected from Cape York, through central Australia, and even from the west coast of Australia.

Because it is so king and docile, some Australians get it as a pet. I reckon it is probably much better that they stay wild ;)