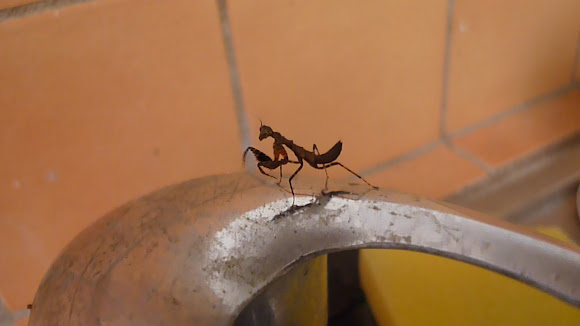 Light & dark brown; nymph as it still did not have fully developed wings. Waved forelegs as aproached.

Most likely a bush dweller.

Found this little guy ontop the kitchen faucet. As soon as it saw me it started waving it's forelegs. Had not seen this behaviour with other mantises I had found, so checked the peculiar act online and found out that Boxer Mantids do this; any identification on the exact species would be great! The second pic is after I put it out in the garden on a bush. Would like to see this type again sometime!

To add this to a mission you have joined, you will need to to go to edit mode ( click on "Edit this spotting". On the right-hand side of the page there is a drop-down list of missions that you have joined. You just click on the appropriate missions for your spotting (up to five) and save changes. Missions you have not joined will not show up on your list. You can add your spottings to missions at the time you create the spotting from that same drop-down list. :-)

Thanks! I did join the group previously, but how do I add it to their list?

Neat find! Please consider adding this to the Marvelous Mantids of the World mission. http://www.projectnoah.org/missions/1573...