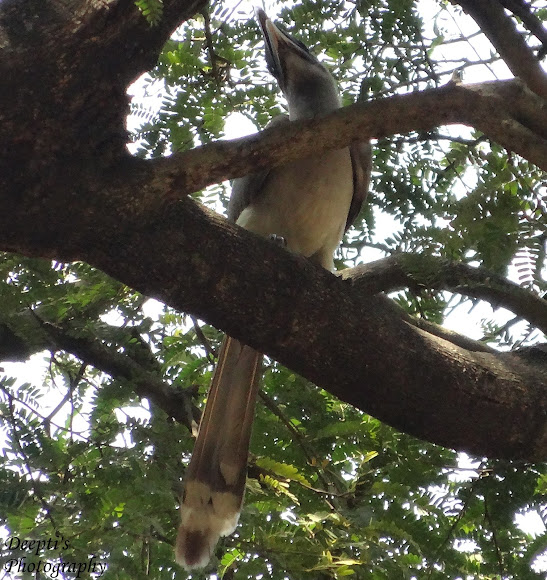 The ‘Indian Grey Hornbill’ has grey feathers all over the body with a light grey or dull white belly. The male has a larger casque on a dark bill, and the culmen and lower mandible are yellowish. The bare skin around the eye is dark in the male, but sometimes pale reddish in females. The female has a more yellowish bill with black on the basal half and on the casque. The juveniles lack the casque, and the bare skin around the eye is dull orange. The call is a squealing call somewhat like that of a black kite. The flight is heavy and involves flapping interspersed with glides. They are found in pairs or small groups. ‘Indian Grey Hornbills’ usually nest in tree hollows on tall trees. An existing hollow may be excavated further to suit. The female enters the nest hollow and seals the nest hole, leaving only a small vertical slit through which the male feeds her. The nest entrance is sealed by the female using its excreta and mud-pellets supplied by the male. While inside the nest, the female moults her flight feathers and incubates the eggs. The regrowth of the female's feathers coincides with the maturity of the chicks, at which point the nest is broken open. After the emergence of the female from the nest, she joins the male to feed the chicks in the nest.

Group of huge tamarind trees, nearby a dried stream. Countryside.

Hornbills have a two-lobed kidney. They are the only birds in which the first and second neck vertebrae (the atlas and axis respectively) are fused together; this probably provides a more stable platform for carrying the bill. The family is omnivorous, feeding on fruit and small animals. They are monogamous breeders nesting in natural cavities in trees and sometimes cliffs. A number of species of hornbill are threatened with extinction, mostly insular species with small ranges. Hornbills possess binocular vision, although unlike most birds with this type of vision, the bill intrudes on their visual field. This allows them to see their own bill tip and aids in precision handling of food objects with their bill. The eyes are also protected by large eyelashes which act as a sunshade. The most distinctive feature of the hornbills is the heavy bill, supported by powerful neck muscles as well as by the fused vertebrae. The large bill assists in fighting, preening, constructing the nest, and catching prey. A feature unique to the hornbills is the casque, a hollow structure that runs along the upper mandible. In some species it is barely perceptible and appears to serve no function beyond reinforcing the bill. In other species it is quite large, is reinforced with bone, and has openings between the hollow centre, allowing it to serve as a resonator for calls. In the helmeted hornbill the casque is not hollow but is filled with hornbill ivory and is used as a battering ram in dramatic aerial jousts. Aerial casque-butting has also been reported in the great hornbill.