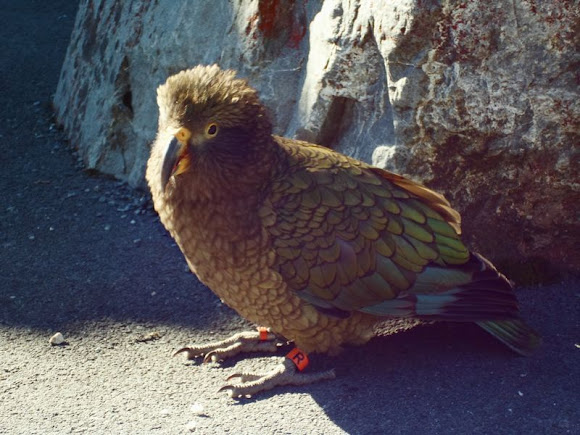 out 48 centimetres (19 in) long, it is mostly olive-green with a brilliant orange under its wings and has a large narrow curved grey-brown upper beak. The Kea is the world's only alpine parrot.

The Kea ranges from lowland river valleys and coastal forests of the westcoast up to the alpine regions of the South Island such as Arthur's Pass and Aoraki/Mount Cook National Park, closely associated throughout its range with the southern beech (Nothofagus) forests in the alpine ridge. Apart from occasional vagrants, Kea are not found in the North Island, although fossil evidence suggests a population lived there over 10,000 years ago.

Also name by Kiwis and Maori "KEA" Endemic parrot of the South Island's high country. Although kea are seen in reasonable numbers throughout the South Island, the size of the wild population is unknown - but is estimated at between 1,000 and 5,000 birds.

The funny thing is that even if he is wild he is not scared at all of humans !

That is one cute bird!