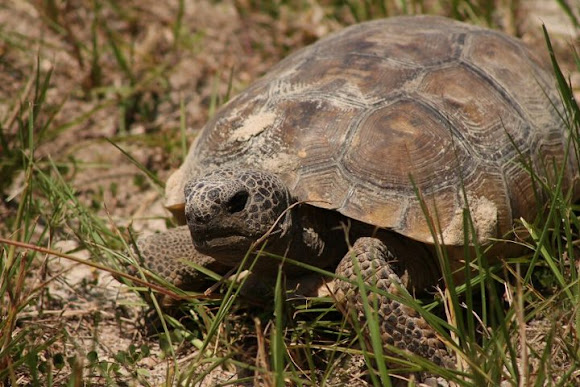 The gopher tortoise is a fairly large terrestrial turtle which possesses forefeet well adapted for burrowing, and elephantine hind feet. These features are common to most tortoises. The front legs have scales to protect the tortoise while burrowing. They are dark brown to gray-black in overall color, with a yellow plastron (bottom shell). A gular projection is evident on the anterior plastron where the head projects out from the shell. Sexual dimorphism is evident, with male gopher tortoises having concave plastrons, while those of females are flat. In addition, the gular projection on male plastrons is generally longer than in females. Carapace length can range from 20 to 30 cm (7.9 to 12 in), with a height (to the peak of the shell at the middle of the body) of 15–37 cm (5.9–15 in). Body mass averages 4 kg (8.8 lb), with a range of 2–6 kg (4.4–13 lb).[