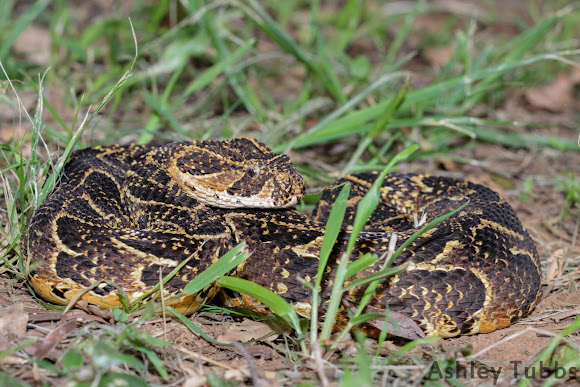 A mixture of black, browns, and yellows. This was the most exciting snake from the trip for me! They are in the top 5 snakes of being responsible for the most deaths in the world. They don't have the worse venom, but they have a large range, populations are large, and they live close to humans.

Found on the porch of our lodge at night in a thorn scrub area.

We were out frogging at ponds that night when this guy showed up. Our guide was back cooking dinner and found him. He radio'd us and told us, we told him he wanted it, but we had the snake tongs and hooks with us. We don't know how he did it, but when we got back, the snake was sitting under a bucket with some heavy rocks on it so he couldn't get out. Was photographed the next morning and released!

Thanks Melody and Tom! This was the only deadly one, technically the Herald Snake and Skaapsteker are venomous but not bad. Similar to what a hognose bite would do to you

Nice adder! Did you find other venomous snakes?