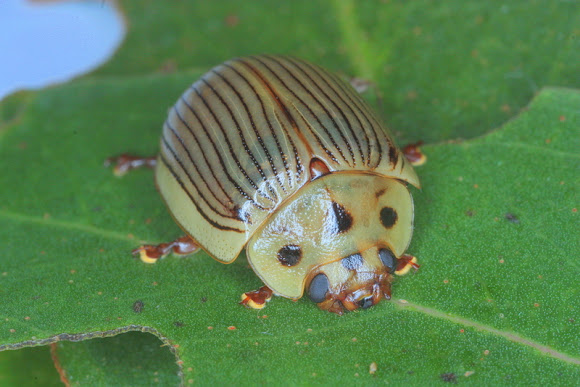 This dapper insect with pinstriped suit and too many eyes is a nocturnal beetle found under bark in the daytime or occasionally at lights in the evenings.

Found at lights in Tasmania.

Sent by Ian in Exton (Tasmania) who suspected this beetle to be unusual. According to my references and the databases, this insect does not occur in Tasmania. UPDATE; this beetle is common in Tas but had been misnamed so not recorded as intacta.

Hey Charlie I'm gobsmacked by what I suspect is going on with eurowasps especially in Tasmania. I've seen them catch fast-flying (native) mid air cut the head off throw it away and settle to suck the guts within a single second. This cool summer has brought them out in huge numbers here (unlike previous summers they almost disappeared) and I'm certain we are missing a huge number of our mid-sized arthropod groups as a result. When I think of the numbers always in Tas now it's horrible to consider the ecological damage being done.

I find intacta only under smooth barked eucalyptus but it is not recorded to occur yet in Tasmania. Black slim species like lineata are found under stringybark types. You can just peel open the bark without removing very much of it.
I think your little one for which I suggested a new name is ready for hibernation as it is diurnal.

I am only just learning to be looking under the loose bark ...this past weekend , i found a gorgeous big stag beetle , a stunning cockroach and a Paropsisterna agricola - posted tonight ...though he was so pale ) ....all hiding ...alot of the bark is falling and stripping away , in the forest , you have to watch your head ...a few times big bits crashed in front of me ...but OHH the little finds....so i will be checking even more so if a beauty like that can be found.

Thanks Charlie. Still in his pyjamas ;)
This might have been the only one in Tasmania and Ian sent it back :(
They are common in Vic. but seldom seen because they hide under bark.
They are sometimes found at lights but I don't think they are particularity keen to follow lights.

Oh WOW...what a striking beetle ...not seen one . The European wasps are out in FORCE! .....last 2 walks i have seen them and nothing else :(

Haven't seen many of those yet.
But the leaf beetles are mostly gone already.

The European wasps will fix that.