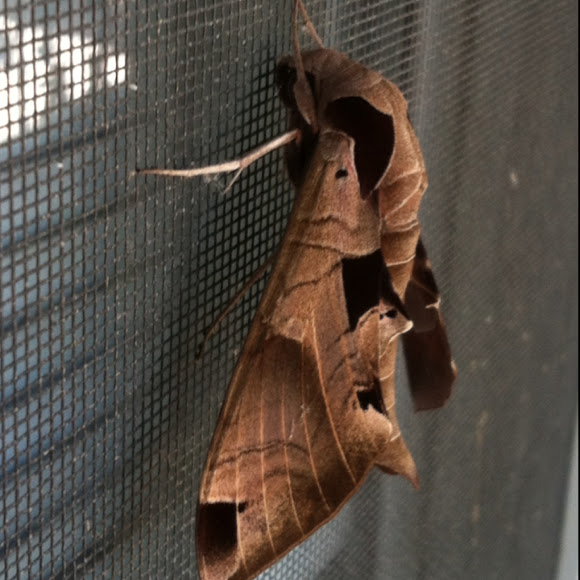 The Achemon sphinx (Eumorpha achemon) is a moth of the Sphingidae family. The wingspan is 87-97 mm. It can be distinguished from all other Eumorpha species by the hindwing upperside being almost uniformly pale pink from the base to the diffuse, dark brown submarginal band. Adults are on wing from June to August in one generation in the northern part of the range. There are two generations with adults on wing from May to August in the south. Adults feed on the nectar of various flowers, including Lonicera japonica, Petunia hybrida, Philadelphus coronarius and Phlox. Larvae are known to feed on Vitis, Parthenocissus quinquefolia, grape and Ampelopsis species. There is a light green, a reddish-orange and a darker tan/brown form. From Wikipedia

It is known from Maine west to North Dakota, Manitoba and southern Oregon and south to southern Florida, west to southern California and Mexico.

I saw this on the screen of my window. I thought it was a dead leaf was stuck to it!

No problem! It was a joy to see these photographs! http://www.projectnoah.org/spottings/124...
The link above shows what Eumorpha pandorus looks like, for reference. :)

Thanks for the point in the right direction, Carol. I'm thinking Eumorpha pandorus, what do you think?

I've never seen a moth like this, or this large before!

Wonderful Sphinx Moth. Family: Sphingidae, but I don't see it in my Northeast USA book.

Those are spectacular moths! Congrats for the photos.