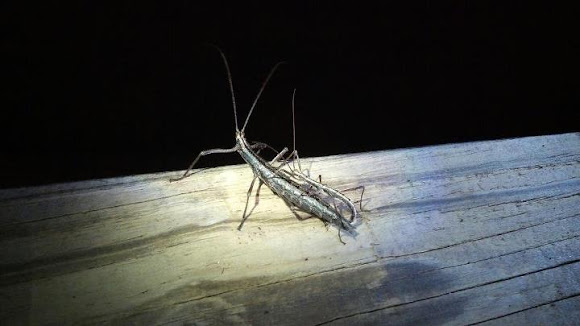 This species, and another in the same genus (Anisomorpha ferruginea, whose range is more west and north, but may overlap with A. buprestoides) is particularly well known for its very potent chemical defense spray which it deploys from a pair of glands which open at the front of its thorax. The "Devil rider" name for this insect likely comes from this defense, as well as the fact that they are most frequently encountered in the late summer and fall when they are active adults at a time when almost all of them are found in mating pairs, with the smaller male riding on the back of the larger female. The chemical defense of this species was first studied by Thomas Eisner and Jerrold Meinwald (two scientists at Cornell University who helped found the field of chemical ecology).[2] They found the chemical defense spray of this species was found at the time to contain predominantly a cyclopentanyl monoterpene dialdehyde compound which they called "anisomorphal".[