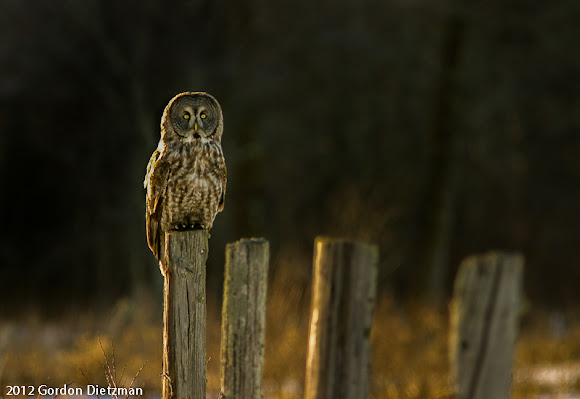 This large owl's size is partially attributable to its fluffy feathers. Still, it is a very impressive bird of prey. Its head is large and rounded. Predominant color is gray or grayish brown.

Generally associated with boreal forests. In some winters when prey populations crash, these big birds head south in what is known as an "irruption", in an attempt to find food.

I got this photo In the winter of 2004-2005 during a massive irruption of northern owls, which occurred in Minnesota and other northern states. Usually I see one or two on winter days in northern Minnesota when looking for them. That particular winter I was seeing up to 65 of these birds a day. They are not particularly afraid of humans and cars so photography can be very good. However, that lack of fear also led to many being hit by cars as the owls hunted along roadways.

Christy, No problem. I'm surprised I remembered you mentioning it...grin.

Ha! Sorry for the redundancy!! Your shot definitely makes me think of him!!
;-)

Christy, I remember you mentioning that the center had a great gray. Phantom is a really good name for these spectacular and elusive birds. The photo was taken right at sunset and the setting was absolutely perfect for owl photography, with the dark, mysterious forest in the background and the strong lighting as the sun sank. And those eyes!

Love love love this Gordon!! We had a resident Great Grey named Phantom at our rehab facility here in Colorado...and I loved being around him!! These are one of my favorites, and you captured him (her?) beautifully!!!

Yes, this is one of my favorite all time shots. This owl was hunting along this forest edge as the sun was setting. Picture perfect! We rare see great grays here in Minnesota, although we have a few living here, but they are rarely seen, except during irruptions.