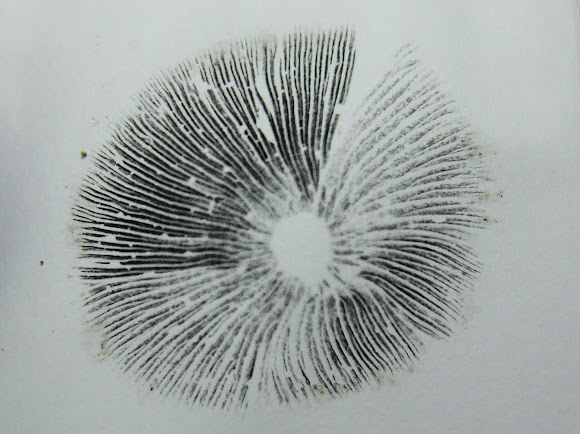 Commonly referred to as the Weeping Widow, because of the black, watery droplets that appear at the cap rim and on te edges of the gills when they are moist. Cap Initially bell-shaped with a woolly, in-rolled margin to which pale fragments of the veil remain attached. At maturity, caps growing to between 4 and 12cm in diameter, usually retaining a distinct umbo. The reddish cap surface is radially streaked with yellow and clay brown tinges. Gills Adnexed to free; initially yellow-brown with a very pale edge, but soon becoming blackened with spores. The gill edges hold black watery droplets when moist. Stem 5 to 10mm in diameter; 5 to 10cm tall; a paler brown than the cap but more russet towards the base; fibrous, with a ring zone of pale fibres that soon become stained black by falling spores. Spores of Lacrymaria-lacrymabunda, Weeping Widow mushroom Spores Ellipsoidal to lemon shaped, warty, 8-11 x 5-7μm, with a germ pore. Spore print Black.

This large grassland fungus is an occasional species in parkland, open woodland, lawns, fields and roadside verges. Saprobic, in grassland and on verges beside lanes; occasionally also in woodland clearings. April to November in Britain and Ireland, but most common between early July and late September.

Spotted in a mix forest near my house,in the base of a sandy land remains of a construction building, possibly come from a beach. My first black spore print https://www.google.pt/url?sa=t&rct=j...

Thanks Ava :-) they are so easy to do,that iam making them for all of my latest spottings,very easy,only cut the cup with a sharp blade and put it on a paper,with or black,depending on the collours,some of them make a mark in bothh paer collour,but is to much easy :-)

I love your spore prints.