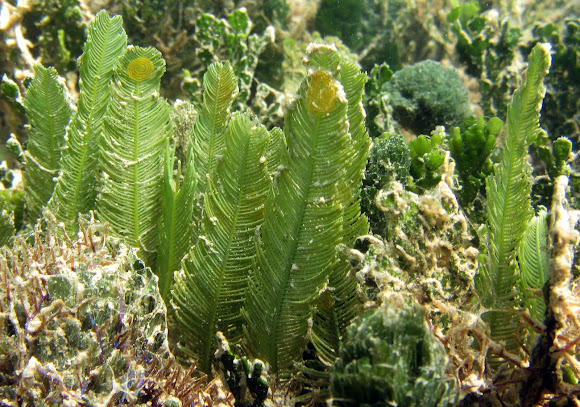 Photo take in shallow waters at -20 ft near the coast a common algae in this area, Flat, featherlike erect branches, which may reach a height of 15-20 cm. The upright branches are dark to olive green in appearance and arise from coarse, moderately thick, branching stolons. The branchlets are cylindrical ending in sharp points and opposite, giving the plant a feathery look. Rhizoids are produced at the tips of long, descending, sometimes forked branches of the stolons, which penetrate the sand and thus anchoring the plants firmly.

Grow in shallow sandy areas, often between protected shallow reefs. Also grow in areas of mangroves and occasionally attach to their roots.Found from Florida all the Caribbean sea, Gulf of México to north Brazil.