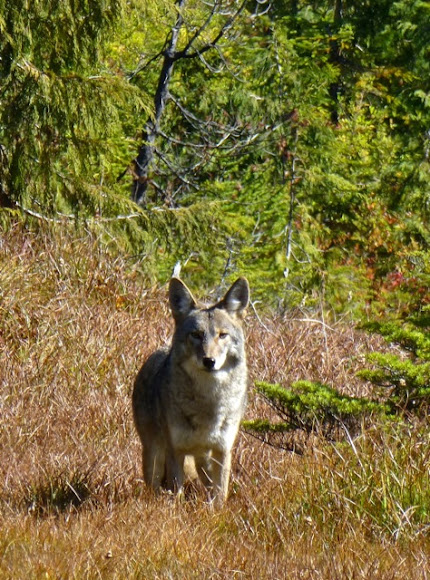 This is my 1,000 spotting! I was pretty sure this is a wolf, though several people I met in the Cyprus Provincial Park after I spotted it, said wolves were never seen there, and that it must have been a coyotee. There is a story connected to it... I was in the park collecting photos of fungi, but I also really wanted to see a bear. At one point the forest opened out into a meadow, some movement caught my eye, and there was this animal, 20 meters away eating something in the grass. Didn't seem scared of me at all, just finished eating, looked up at me, then wandered off. Later as I was leaving at sunset, it howled 8 - 10 times, and I turned and followed the sound back and was in time to see it trotting across the ski runs into the forest again (last 2 photos) Made my day! And I also spotted 2 bears, mother and baby, eating the plentiful ripe blue berries in the park in the late afternoon. Great day on the mountain!

@RolandEGauthier. Wow, what a story! Glad the one I saw was friendly!

@Noah, yes that info definitely helps... I too wanted to believe it was a wolf! But actually I had no idea what a coyote looked like. Expected somethng more like a Jackal...

I seen on Animal Planet i think a famous singer in Canada was killed by one, and it was odd because they run away if humans around, but a few attacked and killed this lady, It was above maine in Canada, afrter weeks of investigation they found out the Coyotes are mixed breed with wolf which may explained why the attack, i fell asleep on the rest of show, wished i seen it now, it looks just like this one. I strongly believe this one has wolf mix by looking at his ears and facial features.

You're welcome Pam. I did the same mistake 2 years ago.
I guess I really wanted to believe it was a wolf until a friend explained me how to differenciate them.

thanks Noah Citizen for the info about different noses in the ID of a wolf or a coyote...

thanks EmilyMarino for naming this coyote by it's name - not a wolf! It's the first time I have seen a coyote, I think. I'm learning a lot, and next time I see one, I should be able to recognise it...

It is most definitely a coyote! What a beauty! Their songs and howls are haunting. They are one of my favorite animals! Congrats on 1K!

Could it be a coyote/wolf hybrid?

Great Shots and Subject! To the next 1000! :D I agree with Noah Citizen.

Such hairy one with beautiful fur should be Coyote as Noah Citizen said. I am not expert on them but feel like that.
Great Achievement Pamela. You are real Nature trail lover to find spectacular spottings. A precious collection in Project Noah's Ark.....

This one is for sure a coyote. The last picture shows clearly the pointed nose of a coyote. A wolfe has a shorter and more "square" nose.
Great shot, though!

Wonderful spotting, congrats for the #1000