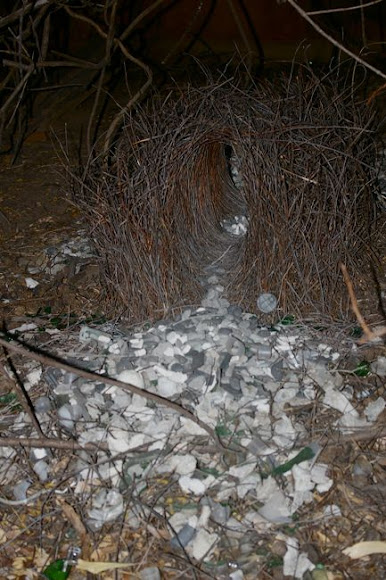 The bowerbirds have an Austro-Papuan distribution, with ten species endemic to New Guinea, eight endemic to Australia and two found in both.[4] Although their distribution is centered around the tropical regions of New Guinea and northern Australia, some species extend into central, western and southeastern Australia. They occupy a range of different habitats, including rainforest, eucalyptus and acacia forest, and shrublands.

Bowerbirds are most known for their unique courtship behaviour, where males build a structure and decorate it with sticks and brightly coloured objects in an attempt to attract a mate. The male builds the largest bower of all bowerbirds. It is a twin-walled avenue-type bower approximately 1 metre long and 45 cm high. It is typically located under a shrub or leafy branch. The ends of the bower are scattered with white and green objects - stones, bones, shells and leaves and small man-made objects such as plastic and bottle caps. Within the bower itself is sometimes placed clear glass.

Please, please consider adding this spotting to the Animal Architecture mission at http://www.projectnoah.org/missions/8082...
Also, the bower is not the nest. The female builds the nest in a tree and raises her chicks alone.

Could be a Great Bowerbird, Chlamydera nuchalis .. I watched them at the Keep River National Park!

At that location it is probably the Bower of the Great Bowerbird; Chlamydera nuchalis. http://en.wikipedia.org/wiki/Great_Bower...
Nice find.