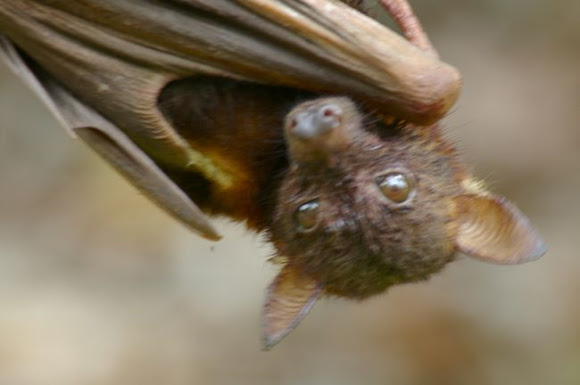 Operation rescue on this spotting - With a weight of 280–530 grams (9.9–19 oz) it is the smallest flying fox in mainland Australia (the others being the Black, Spectacled and Grey-headed flying foxes).

A species of megabat native to northern and eastern Australia. It has the widest range of all the species, going much further inland than the larger fruit bats. Its diet primarily consists of nectar and pollen of eucalypt blossoms, the pollination of which it is largely responsible. The little red flying fox is nomadic, and can be found in large groups of up to a million individuals. This species births six months later than the other mainland flying fox species, giving birth in April–May

The wing of the bat was completly wrapped in barbed wire, in a fence of a mango farm. We cut the fence and had to cut a bit of its wing but fortunatly the wing of bat will regrow !! After this shoking experience, the poor little fox was sweating from stress.. We carried it in a little box and release it into safety...She flew to freedom..Awsome moment.

Great job! Thanks for sharing!