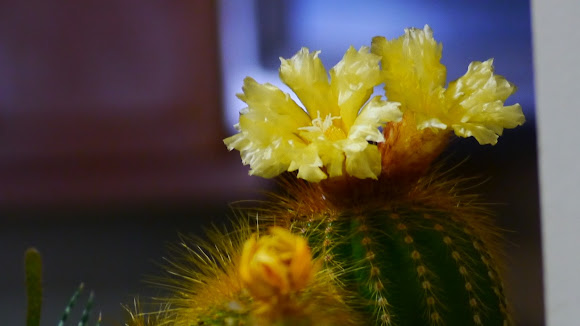 A cactus is a member of the plant family Cactaceae, within the order Caryophyllales. The word cactus derives, through Latin, from the Ancient Greek κάκτος (kaktos), a name originally used for a spiny plant whose identity is not certain. Cacti are native to the Americas, ranging from Patagonia in the south to parts of western Canada in the north—except for Rhipsalis baccifera, which also grows in Africa and Sri Lanka.

Most cacti live in habitats subject to at least some drought. Many live in extremely dry environments, even being found in the Atacama Desert, one of the driest places on earth. Cacti show many adaptations to conserve water. Most species of cacti have lost true leaves, retaining only spines, which are highly modified leaves. As well as defending against herbivores, spines help prevent water loss by reducing air flow close to the cactus and providing some shade. Cactus spines are produced from specialized structures called areoles, a kind of highly reduced branch. Areoles are an identifying feature of cacti. As well as spines, areoles give rise to flowers, which are usually tubular and multi-petaled.