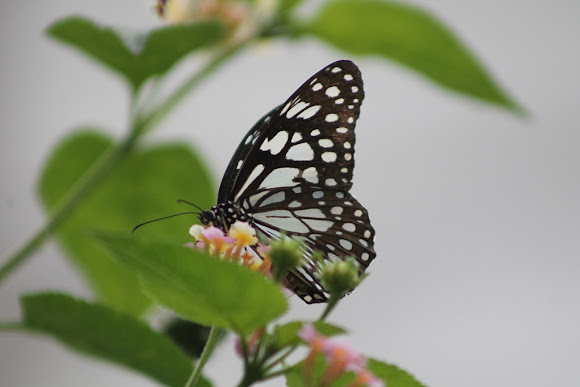 The sexes are similar in pattern and size. The pattern is similar on both wing surfaces. The upper surface of both its wings is black with blue markings. Its underside is much lighter in both background colour and markings. The forewing cell has a basal streak and an irregular distal spot. The patch below the cell is large and irregular, and occasionally separates out into parts. The hindwing cell is almost blue, leaving very little black. There is a line along the basal part of the second and third vein of the hindwing, which forms a ‘

In my backyard, feeding on Common Lantana.

The Blue Tiger likes to fly in sunny conditions in a moderately fast, casual flight and settles with both open and closed wings. When they feed on a flower cluster, they crawl from flower to flower with their wings flapping slightly. Males congregate with other Tigers and Crows to take in toxins from plants such as Heliotropium indicum and Crotalaria retusa. They use their feet to remove the upper tissues of the leaves and pods of C. retusa and suck the sap. It is a migrant species. This species is abundant in open vegetation in the dry zone.