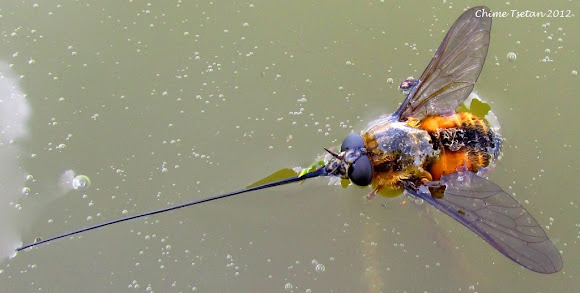 Philoliche longirostris is a fly of the Tabanidae family native to India, specifically the Himalayas. It was first identified by Thomas Hardwicke in 1823.[3] Notable is its proboscis, which is "many times longer than its body". - Wikipedia.

at altitudes above 3200 meters nearby to Jalori pass. there were temporary water pits dug up by forest department for wild animals. those water pits formed a death trap for many of the insects which forms the local fauna of the alpine meadows.This one with the long proboscis caught my eyes. :)

thank you Argy Bee. the description and the distribution fits the bill perfectly. :)

BugEric gave some clue to find this ID suggestion.

thank you lori.tas Will be excited to know which species. :)
Thank you JillBlack. :)