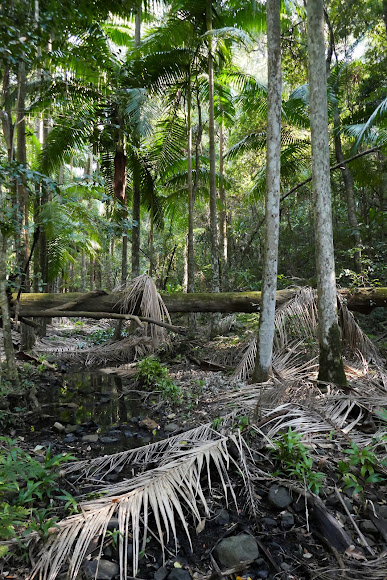 Archontophoenix cunninghamiana, commonly known as the Piccabeen Palm, is an Australian native that is naturally occurring in the warmer coastal rainforests of Eastern Australia, from around Batemans Bay on the NSW south coast to Mackay in QLD. They usually grow in large groves comprised of thousands of trees, and the preferred habitat is mostly in moist sites like sheltered gullies, along creek courses and on alluvial flats. Mature palms can exceed 20 metres in height, although some sources say they can reach 25. Flowering is in midsummer, and the red fruits are attractive to birds. Piccabeens have been given this name in Queensland because it was the name used by the aboriginal tribes in the Brisbane area. It is also known as the Bangalow Palm to those from Northern NSW. It has become quite an invasive species in many parts of the world.

Ravensbourne National Park, spotted along Palm Creek and Buaraba Creek tracks. Despite this country currently being in drought, Ravensbourne is still quite lush, moist and cool, and water still trickles in its creeks and gullies, mainly because the creeks like Buaraba are spring-fed. Piccabeen Palms grow thickest where drainage is poor. The dense canopy produces very filtered light, and abundant leaf litter helps retain moisture, keeping temperatures reasonably cool. Towering above the palm groves are Sydney Blue Gums (Eucalyptus saligna) which are quite majestic (2nd photo) plus actual spotting - https://www.projectnoah.org/spottings/70... Park elevation is above 500 metres. Here's some info - https://parks.des.qld.gov.au/parks/raven...

There was a back-burning operation underway in the areas surrounding Ravensborne on the day I visited, and light, variable winds caused smoke to waft up through the eastern gullies on occasion. Nothing extreme, but it did add to the character of the palm groves, rainforests and eucalypt woodlands, creating an amazing primordial scene. I'm not keen on smoke, but I'm glad I got to experience its magical effect this particular day. An interesting fact about this area - Aboriginal Australians found Ravensbourne a rich and reliable supply of food, and would dig for yams and collect other bush tucker. Ravensbourne is also situated along an ancient pathway taken to the Bunya Mountains for the bunya festivals.

Thanks, Brian. I prefer to hike alone, but it's nice to tell the story afterwards. The photos can do the talking :)

Always enjoy your spotting Neil! Interesting notes and the pictures make me feel like I'm there.