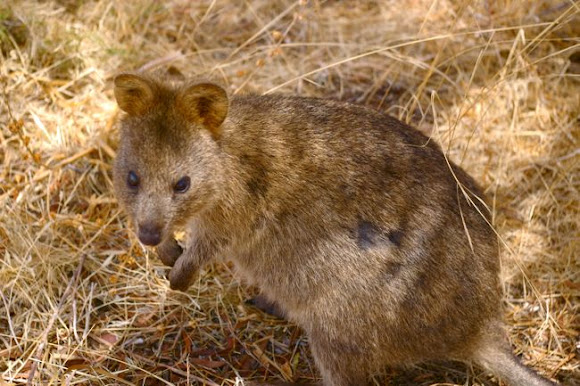 The quokka weighs 2.5 to 5 kilograms (5.5 to 11 lb) and is 40 to 90 centimetres (16 to 35 in) long with a 25 to 30 centimetres (9.8 to 12 in) tail, which is rather short for a macropod. It has a stocky build, rounded ears, and a short, broad head. Although looking rather like a very small, dumpy kangaroo, it can climb small trees and shrubs.Its coarse fur is a grizzled brown colour, fading to buff underneath.

The quokka is herbivorous and mainly nocturnal. It can be found on some smaller islands off the coast of Western Australia, in particular on Rottnest Island just off Perth and Bald Island near Albany.

As they are not scared of humans, please DON'T FEED THEM, or they will become SICK...I've seen some in a bad state : losing their fur and quite tired... And I intercepted some teenagers while they were feeding Quokkas with hot chips !!!! NEVER FEED ANY WILD ANIMAL please...

Lucky you. I've always wanted to go to Rottnest island just to see these. The Dutch actually named the island "rat nest" because they thought the Quokka were some type of huge rat. And yes, never feed the wildlife, especially any human food.